Posted in:
Former Reporter Regains Ability to Play with Grandchildren 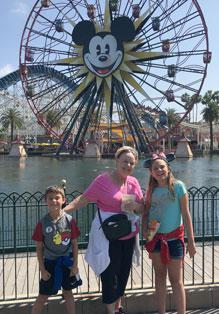 Pat Milich is a former reporter and news editor from the New Jersey area. Widowed at a young age with three children, she spent more than 15 years as a large school district’s public information director and later formed her own public information consulting business. After retiring, Milich relocated to Arizona in 2012 to be closer to her daughter and two of her three grandchildren.

Approximately three years ago, the West Valley grandma noticed herself growing short of breath while running around huffing and puffing, playing the big bad wolf with her little pigs.

“I lost both of my parents to heart disease, so I thought I was having heart problems and decided it was time to visit my primary care doctor,” recalls Milich, 72. “I was prescribed some more acid reflux medication because my heartburn seemed to be worsening, and sent for a chest X-ray. I never expected what came next.”

In early 2015, Milich was referred to a local pulmonologist who diagnosed her with a rare and often deadly lung condition called idiopathic pulmonary fibrosis (IPF). It is typically characterized by scarring of the lungs which has no known cause and progressively gets worse over time.

“I went home in a trance. I thought it was a death sentence,” says Milich. “I began to research and everything I read said it is terminal within three to five years. I told the pulmonologist that I wanted a second opinion from the best, and I was surprised when I was referred to St. Joseph’s.”

On Oct. 22, 2015, Milich met with Tanmay Panchabhai, MD, a pulmonologist at the Norton Thoracic Institute, which is part of Dignity Health St. Joseph’s Hospital and Medical Center in downtown Phoenix. Dr. Panchabhai is the associate director of the institute’s Pulmonary Fibrosis Center.

Tests at Norton confirmed the lung scarring was progressive. A minimally invasive VATS biopsy was recommended to ensure an accurate diagnosis. “Pulmonary fibrosis is a term used to group many disorders that have varying prognosis over a broad spectrum. When the pattern of pulmonary fibrosis is not ‘typical’ for IPF, a biopsy can help decide course of treatment,” says Dr. Panchabhai. “Pat was in denial when I first met her. She said she would think about getting the procedure, but I could tell she was hesitant. So, I suggested we also discuss her health with her kids. If we could determine the cause of the scarring, we could determine alternative treatment options.”

After learning of their mother’s condition, Milich’s son and two daughters encouraged her to get the biopsy. Still anxious, she was invited by the Norton team to attend a lung disease support group which helped ease her decision to move forward with the procedure.

“I am so thankful Dr. Panchabhai, his nurse practitioner Rebekah, and their entire team are all so knowledgeable and persistent,” says Milich. “Dr. Panchabhai was up to date on all the cutting edge research linking GERD to many different forms of lung disease, including IPF. I never imagined that it could be my lungs in the first place, let alone that my heartburn could be the culprit.”

Gastroesophageal Reflux Disease, commonly referred to as GERD, is a growing health problem in the United States. It causes frequent acid reflux, or heartburn, which occurs when acid or other stomach contents back up into the esophagus. It is estimated that more than 60 million Americans experience heartburn at least once a month and 15 million suffer from it daily.

Milich met with Michael Smith, MD, a thoracic surgeon and surgical director of the hospital’s lung transplant program. St. Joseph’s Norton Thoracic Institute is home to the nation’s busiest lung transplant program and a multidisciplinary lung and esophageal team. Dr. Smith ordered another battery of tests which confirmed that Milich had a severe case of GERD that needed surgical intervention. 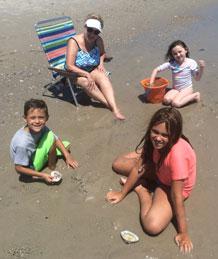 In early 2016, Dr. Smith performed a procedure to fix the GERD as well as the VATS biopsy.

“No surgery is fun, really. But, I only spent two days in the hospital and was eating normal food within a few weeks, and I was completely off the acid reflux medication,” says Milich. “My color had gone from gray back to rosy and I was even breathing easier.”

Doctors at Norton confirmed the diagnosis of interstitial lung disease as a result of GERD based on her clinical history and the biopsy results, just as Dr. Panchabhai and his team had initially suspected. This condition has a much better prognosis.

While the procedure cannot reverse existing lung scarring, Milich’s lung function stabilized and has not declined since the surgery.

“I am feeling great,” says Milich. “Because of the expertise, incredible kindness and tenacity of the doctors at Norton Thoracic Institute, I have a new lease on life and am able to play with my grandchildren again.”