PHOENIX, AZ - Dec. 20, 2018 - A Valley teen is thankful to celebrate the holidays this season after surviving a massive heart attack caused by a rare heart condition. Anthony Rojas, 16, suffered a rare heart attack in 2016 and has spent the past two years recovering after three life-saving procedures. Anthony has made an amazing recovery thanks to his medical teams at Dignity Health St. Joseph’s Hospital and Medical Center and Phoenix Children’s Hospital.

“More than going back to school, I am glad I finally have a driver’s license,” says Anthony, who attends a charter high school in Glendale called e-Institute. 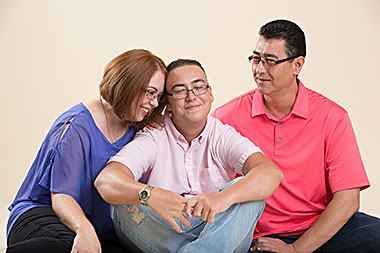 Like most teenage boys, the Surprise resident enjoys playing video games with his friends. Unlike many his age, Anthony has Kawasaki disease, which is a rare and difficult to diagnose condition that causes inflammation in the walls of some blood vessels in the body. It is most often diagnosed in children younger than age 6, and is the most common cause of heart disease in children.

“I’m a nurse and I knew something wasn’t right with my son. He wasn’t himself. He had a fever, some swelling in his lymph nodes and red, bloodshot eyes,” says Anthony’s mother, Rebecca Rojas, when describing her son’s first symptoms.

Anthony finally received a diagnosis in August 2016 at Phoenix Children’s Hospital after a number of doctors’ visits with no answers. The rare heart condition would force him to quit football, but the Anthony family accepted the changes and did their best to return to their daily lives.

Then just two months later, the family rushed to the nearest hospital. Anthony had suffered a massive heart attack and was transferred to Phoenix Children’s Hospital for an emergency heart procedure.

Doctors removed as many of the blood clots from Anthony’s heart as possible, but his heart was severely damaged. Doctors needed to quickly find an adult cardiologist. Anthony’s situation was so dire he needed to be placed on the heart transplant list.

“The doctor said the amount of damage was so great that our son needed to be listed for a heart transplant while they tried to find another doctor who had access to the adult equipment that wasn’t available at a children’s hospital,” Rebecca recalls.

After hours of dedicated coordination, Anthony was transferred to Dignity Health St. Joseph’s Hospital and Medical Center where he had a second life-saving procedure performed by Hursh Naik, MD, medical director of the hospital’s Cath Lab and Structural Heart Program.

“Anthony’s situation was very unique,” says Dr. Naik. “We used a treatment commonly used to open arteries to the brain in order to open the arteries to his heart. Then we supported his extremely weak heart with a pump that can be placed without open heart surgery. This allowed his heart to recover and avoid a heart transplant.”

Once stabilized, Anthony was transferred back to Phoenix Children’s Hospital, where his health turned perilous for the third time in 24 hours. A damaged vessel had burst in his back and he was bleeding internally. He was rushed in for another emergency and life-saving procedure at the children’s hospital.

“It was the coolest thing,” recalls Anthony’s father, Carlos Rojas. “All three of his heart doctors, from St. Joseph’s and Phoenix Children’s, came to his room to tell us  the procedures had gone so well that Anthony had been removed from the transplant list.”

Rebecca says it was more than a relief, “It was one of the happiest moments in my life.”

Life hasn’t exactly been easy, but Rebecca calls her son a fighter. Anthony had a defibrillator implanted and has regular heart check-ups at St. Joseph’s and Phoenix Children’s. He had to give up contact sports, and even skateboarding, because he will likely need to be on blood thinners for the rest of his life.

Anthony takes life as it comes. He has a girlfriend and plans to spend the rest of this year catching up in school since he missed so much due to his illness.

Dr. Naik says it is rewarding, “to see how well Anthony is doing, given all that he and his heart have been through. I hope he knows how amazing that is, and that he has a wonderful holiday with his family this year.”

“The worst part, really, is not being able to skateboard with my friends. I’m used to all of the doctors’ appointments by now,” says Anthony who travels with is mother around the country, attending and speaking at events in an effort to educate others about Kawasaki disease. “I know it’s rare, but I’ve met other kids who have Kawasaki disease too. One thing we all have in common is that we just take things day by day, and don’t take life for granted.”