PHOENIX, Ariz. (March 1, 2019) – Women are making strides to overcome gender bias in medicine, some studies suggest. In 2017, the number of women enrolling in medical school exceeded the number of men for the first time. In 1966, women represented only about 9 percent of new enrollees. Below are three inspirational female doctors who are leading the way in their male dominated fields. The physicians practice at Dignity Health St. Joseph’s Hospital and Medical Center and Barrow Neurological Institute in Phoenix. 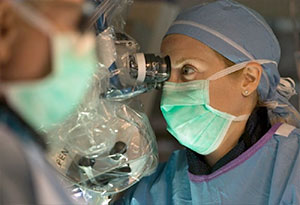 When Dr. Snyder graduated from medical school in 2008, women only accounted for 5.9 percent of practicing neurosurgeons.

“I accepted that I would usually be the only female surgeon in the room,” says Dr. Snyder. “I recognized that I would always be a little bit different from the general group, but I was willing to accept that because I really wanted to be a neurosurgeon.”

Even though the number of women entering medical school is increasing, the number of new neurosurgeons relative to the population are decreasing.

“Women add a different perspective to a team, which helps with problem-solving and makes the team more successful,” says Dr. Snyder, who in addition to serving as Barrow's and St. Joseph’s director of Neurotrauma, is also a new mother. “Even though being a mother and a neurosurgeon is hard, both roles are very important to me, and both roles offer insight into the other.” 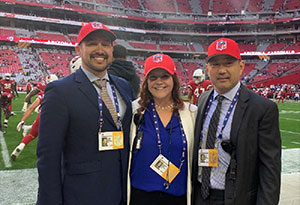 Glynnis Zieman, MD, a Barrow sports neurologist who specializes in the treatment of concussion and other forms of brain injuries, is one of the few female doctors on the sidelines of NFL games monitoring for and diagnosing concussion in professional football players. Dr. Zieman, who serves as a neuro trauma consultant for the NFL, strives to educate her female medical residents to avoid fear of working in a male dominated career.

“I have enjoyed paving my way as a woman in medicine and working my way to standing on the sidelines of an all-male sport such as professional football. I want to make sure my female counterparts are not fearful of achieving their dreams because of their gender,” she says.

In addition to her work as a sports neurologist, Dr. Zieman oversees the world’s only program dedicated to treating the effects of traumatic brain injury in survivors of domestic violence. She partners with Phoenix-based shelters to treat patients (95 percent) of whom are women free of charge, thanks to generous grant funds.

“At Barrow, we can treat a professional athlete in one room and then walk across the hall and see one of our homeless domestic violence patients, and they get the same quality of care,” says Dr. Zieman said. “We do our best to spend extra time with them because many of these patients have never had anyone evaluate them for their injuries, let alone their brain injuries. This is an underserved population that deserves more attention.” 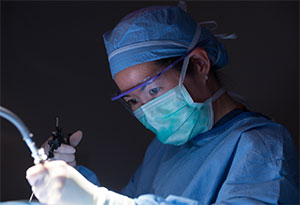 Jasmine Huang, MD, is the only female thoracic and lung transplant surgeon at one of the nation’s busiest lung transplant centers. Dr. Huang, who is the cardiovascular and thoracic surgery section chief at Dignity Health St. Joseph’s Hospital and Medical Center’s Norton Thoracic Institute, advocates for women in her field to believe in themselves and have the courage to stand up for themselves and others.

“I have experienced harassment and discrimination because of both my gender and race throughout my training and career, but this has helped me to become stronger. I have learned to stand up for myself for what I believe in,” says Dr. Huang.

“Working in a male dominated field of medicine has allowed me to know my strengths and trust in myself and who I am,” she says. I’m fortunate to now work in a supportive environment with partners who have helped foster my career and enhance my skills. They have challenged and encouraged me to conquer this issue of gender bias.”