PHOENIX, Ariz. (May 15, 2019) – Doctors told Ann Rooney-Schweikle in August 2016 that she had Parkinson’s disease. But when medication failed to help, she suspected that she had been misdiagnosed.

One year later, Rooney-Schweikle turned to the experts at the Muhammad Ali Parkinson Center, who diagnosed her with Multiple System Atrophy, a rare movement disorder that shares some Parkinson’s symptoms, including slow movement, rigid muscles and poor balance. 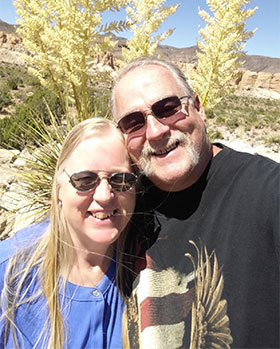 Rooney-Schweikle was admitted to a new program at the Center – the Lonnie and Muhammad Ali Legacy Care Program, which provides patients with access to palliative care and remote visits through telemedicine. The Muhammad Ali Parkinson Center is the most comprehensive Parkinson’s disease center in the world and is located at Barrow Neurological Institute, which is part of Dignity Health St. Joseph’s Hospital and Medical Center in Phoenix.

“What Barrow does for me is give me hope,” Rooney-Schweikle says. “The Legacy Care program is my life preserver as I find myself dog paddling out in this vast ocean called Multiple System Atrophy.”

The Legacy Care Program eases the burden for the 61-year-old Rooney-Schweikle, who lives with her husband, Mark Schweikle, in Kingman, Ariz. On her quarterly visits to the Center in Central Phoenix, Rooney-Schweikle sees her movement disorder neurologist, a physical therapist, an occupational therapist, a speech therapist and a registered dietician. She also checks in with a social worker who helps with myriad issues, including dealing with insurance companies.

“It’s a full day of appointments, and it’s very well organized,” Rooney-Schweikle says. “I like that it’s a multidisciplinary approach. It makes things less stressful.”

From her home in Kingman, Rooney-Schweikle stays in contact with her care team on an iPad provided through the program. “They can be on the iPad face-to-face within a half hour,” Mark Schweikle says. “We can get results. That’s a big relief.”

Movement disorder neurologist and director of the Center, Holly Shill, MD, says even though Parkinson’s disease is incurable, there’s no reason to give up hope. “Many patients live active and productive lives after being diagnosed. It’s essential that we educate and support both patients and caregivers throughout the disease process, because battling Parkinson’s is a team effort. Among the Legacy Care Program’s significant benefits, it allows us to offer our patients continuation of care when transportation to the Center becomes difficult due to the disease progression.”

The Legacy Care Program was created through a $4-million donation from the Bob & Renee Parsons Foundation to provide multidisciplinary, comprehensive care to the Center’s patients who are living with advancing Parkinson’s disease and support for their care partners. It also benefits patients such as Rooney-Schweikle, who has been afflicted with a rare Parkinson’s-like disorder that is estimated to affect between 15,000 to 50,000 Americans.

Rooney-Schweikle says her condition has deteriorated since her diagnosis, but she shows the same fighting spirit that Ali displayed as he battled Parkinson’s. She credits the Muhammad Ali Parkinson Center staff with teaching her how to get out of bed on her own and providing constant encouragement as she bravely faces her disease.

“Although the staff at Barrow cannot help cure my disease or even slow its progression, they do a lot to help me retain a positive attitude,” Rooney-Schweikle says. “They also help with all the incidental problems that cause stress.”