A 12-year-old Florida girl who suffered approximately 50 seizures a month from a rare brain tumor was today officially declared seizure-free after undergoing a new and revolutionary laser brain surgery at Barrow Neurological Institute in Phoenix. 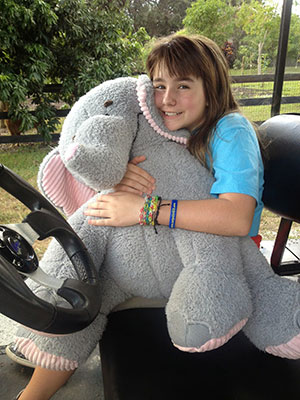 Born with a type of tumor called hypothalamic hamartoma (HH), Holly Hudson traveled to Barrow last year for the new procedure in which brain surgeons were able to remove the mass that was causing her seizures. Since her surgery, Holly has not suffered a single seizure. During her one-year follow-up appointment today, Holly was declared seizure-free by Barrow doctors.

"Not long ago, before this type of laser technology became available, removal of these masses required much more invasive surgery," says Dr. Peter Nakaji, Holly's neurosurgeon at Barrow. "Because of the new laser method, patients are coming to Barrow from throughout the country for treatment. I'm thrilled we were able to help Holly and the whole team at Barrow is gratified by her terrific recovery."

Holly lived her entire life plagued by seizures caused by the tumor. She was diagnosed with epilepsy at age 3, but her tumor was not discovered until last year. The benign tumor is so rare that her team of neurologists and neurosurgeons in Florida had never heard of the condition. Doctors believe that if Holly would not have undergone the surgery and her seizures continued she would have suffered brain damage and problems with learning.

"This condition is not well known and we weren't sure which steps to take to help our daughter," says Gina Hudson, Holly's mom. "As luck would have it, I stumbled across a news story about a young man who had been cured of his seizures following a new surgery at Barrow to treat the same condition. I immediately contacted Barrow and they agreed to take Holly's case."

"We are so happy that we found a treatment option and a terrific hospital like Barrow to treat Holly's seizures," says Gina, who along with her husband, is a firefighter. "I want other parents to know not to ever give up and to always do their research."

HH tumors affect approximately 1 in every 200,000 individuals. They lie in a portion of the brain that is hard to reach without causing severe damage to vital areas. Barrow, which is located at Dignity Health
St. Joseph's Hospital and Medical Center, was the first hospital in the United States to treat HH tumors. The Institute's Hypothalamic Hamartoma Program remains the most experienced in the nation, providing comprehensive evaluation, diagnostic testing and treatment for patients with this rare disorder."

"I'm happy everyone at Barrow was able to help me," says Holly. "Some of my seizures were scary and now I don't have to worry about them." - Barrow