Posted in:
North Dakota Man Fighting for His Life Marries in Phoenix Hospital, Gets Lung Transplant and Returns to the Joy of Daily Living

(Phoenix) Oct. 7, 2015 - Fighting for his life and praying for a pair of donor lungs at Dignity Health St. Joseph's Hospital and Medical Center in Phoenix, a young man from North Dakota knew he might be running out of time. From his intensive care bed, he whispered that he wanted to see a chaplain, and then scribbled his desperate wish for an immediate wedding. Within 24 hours, he got his wish.

Only about two marriages are requested at St. Joseph's each year, making last December's touching wedding ceremony of Jaken Kasper and Kristyn Cannon an extraordinary moment in the hospital's 120 year history.

"I can't thank them enough," says Kasper, 36, who was diagnosed with cystic fibrosis (CF) as a child and had begun relying on oxygen in his mid-20s. Although the lifespan for the CF population has increased from not reaching grade school in the 1950s to currently an average age of 37, lung transplantation can become a viable option as the disease progresses. 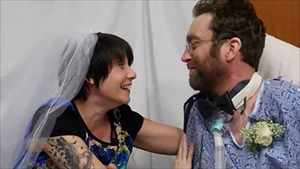 "Not only did they help me marry the love of my life," says Kasper, "St. Joseph's saved my life twice. Today, I'm well. My recovery has been a long road, but I've finally returned to North Dakota and am living a full life with my wife and our girls."

Although lung transplantations are one of the most complicated surgical procedures with a long recovery period requiring lifelong follow up care, Kasper's pulmonologist who attended the wedding, Rajat Walia, MD, says Kasper's story underscores that lung transplant patients "can return to normal, happy lives. This is a terrible condition and the surgery is extremely complex, but Jaken is proof that transplant patients can resume life."

After being listed for nearly two years at a hospital in his native Midwest, Kasper temporarily relocated from Beulah, North Dakota to Phoenix and received a double lung transplant at St. Joseph's on Nov. 11, 2012. No longer limited by CF damaged lungs, Kasper says he enjoyed life-able to do things he thought he might never be able to like move back home, go fishing, swim and hike.

Nearly two years later while back in Phoenix for a routine checkup, Kasper was admitted to the hospital. His once life-saving donor lungs were being rejected by his body, and rapidly. He was fighting for life. Again.

Unfortunately, lungs are unlike any other transplanted organ. Constantly exposed to the environment, lungs tend to have a higher rate of chronic rejection.

"I was disappointed," recalls Kasper. "Kristyn and I were engaged and planning our wedding. So, I decided we shouldn't wait."

Attached to a breathing ­­ machine, Kasper wrote a note to a chaplain explaining his wish to marry Kristyn.  "Because we might not get another chance," he added. 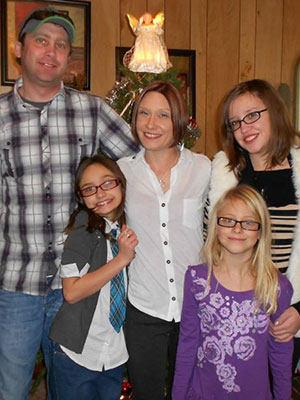 "Those notes are so special to me," says Cannon. "I will cherish them forever. I used to tease Jaken about not being romantic enough, but I can't do that anymore. The hospital made sure it was a very special day for us."

Following the wedding and Kasper's second transplant surgery, Cannon returned home to care for her children and St. Joseph's began working to create a unique wedding gift for the couple-a short music video about their love story. Until now, it has never before been released.

"Jaken and Kristyn's marriage is a gift to all of us," says Jasmine Huang, MD, one of Kasper's transplant surgeons. "Jaken has undergone two very complex transplant surgeries. A redo lung transplantation is one of the most difficult operations that we do. Fortunately, Jaken had an uncomplicated operation and a smooth recovery. We are all excited to see them living each day to the fullest as they plan a long and happy life together."

Kasper spent approximately six months in Phoenix after his transplant, recovering in physical therapy at St. Joseph's. Now home in North Dakota and living life to the fullest, Kasper will travel to Phoenix periodically for regular checkups with his transplant pulmonologists at St. Joseph's.

"I've been given another second chance and I'm going to do everything I can to stay healthy for my family and for both of my organ donors' families," says Kasper. "Although we're planning a big ceremony for the rest of our family and friends to celebrate with us, the team at St. Joseph's has become like family, so it's actually quite fitting they were there to see me say 'I do.'" - St. Joseph's