Retired Teacher Happy to be Alive and Home for Thanksgiving 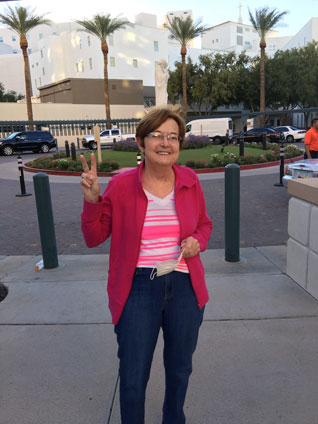 Retired teacher, Robin Ritchie is grateful to be alive this Thanksgiving after receiving the 500th lifesaving lung transplantation at Dignity Health St. Joseph’s Hospital and Medical Center. Recently released from the hospital, Ritchie is looking forward to celebrating Thanksgiving with her husband at their new Arizona home.

The lung transplantation program at St. Joseph’s Norton Thoracic Institute has performed more lung transplantation surgeries than any institution in Arizona history and is the busiest in the western United States. The growing program reached the impressive milestone of 500 lung transplants in less than 10 years of operation, and has seen patients from more than 30 different states.

Ritchie, 67, and her husband Steve permanently relocated to Phoenix from Alpine, Texas after being told she was close to  losing her battle with end stage lung disease. Diagnosed years ago with emphysema and pulmonary hypertension, Ritchie was on oxygen 24/7, but worked very hard to maintain her health.

“I was doing really well for a while, but I went in for a routine annual check-up last summer and the doctor said it was serious,” said Ritchie. “He said I should start considering a double lung transplant and he recommended St. Joseph’s in Arizona. I am so glad I did. Arizona should be thankful that St. Joseph’s is here.”

Norton Thoracic Institute evaluates each transplant candidate on an individual basis. Some lung transplant programs have a strict age limit in their criterion. Ritchie had a positive mindset and was 66-years-old in good physical health, aside from her lung function, at the time of her evaluation.

“We consider patients who are older than 65 because everyone’s body is different. Our program often takes on more complicated cases and has one-year survival rates above the national average,” said Ross Bremner, MD, director of the Norton Thoracic Institute and one of Ritchie’s transplant surgeons. “It is one of the things that makes our team at Norton proudest—from the nurses to therapists, surgeons to pulmonologists and everyone in between, it takes a village and we have a great one."

The average wait time for matching donor lungs for St. Joseph’s patients is only 15 days. Even though it was difficult to find a match because she has rare antibodies, the anxious couple received a call on Oct. 24, just about three weeks after being listed.

“Steve and I were a little in shock but we got in the car and drove to the hospital,” recalled Ritchie, who has four sons and eight grandchildren. “From the moment we started this process at St. Joseph’s, the team has been so encouraging. They are a very tight knit group who are committed to taking care of you; it feels like family.” 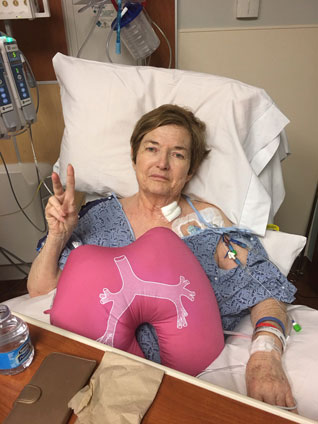 Lung transplantation is among the most complicated surgical procedures, and doctors said Ritchie’s transplant was indeed complex. Ritchie’s other transplant surgeon Michael Smith, MD, who is surgical director of lung transplantation at Norton Thoracic Institute, and Dr. Bremner led the “tight knit” and experienced team that pulled together during the six hour surgery.

“It is a privilege to be able to help people like Robin to have more quality time with their loved ones. That is what transplant is really about,” said Rajat Walia, MD, pulmonologist and medical director of the Institute’s lung transplant program. “To see them making plans this Thanksgiving and enjoying life are moments that make all the endless hours of work worthwhile.”

“I am looking forward to being home and well this Thanksgiving, but more than anything, I am so thankful that I will be able to do things with my grandkids that I never thought would be possible,” said Ritchie, whose passion for educating led her to a second career teaching middle schoolers around the U.S. for 15 years. “I know the average survival time for lung transplant patient’s declines rapidly after five years, but I’ve already decided I am going to work hard to be an outlier because I want to live.”

In the United States, more than 119,000 men, women and children currently need life-saving organ transplants. More than 2,300 people in Arizona need a transplant. One organ and tissue donor can save and heal up to 50 lives. Members of the public can learn more about organ donation by visiting the Donor Network of Arizona online at www.dnaz.org.

Click here to learn more about St. Joseph’s lung transplant program, and to watch a video about Ritchie’s story.