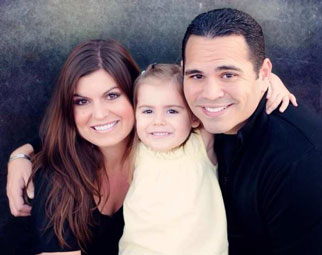 Despite near perfect health, a young Valley man is recovering from a serious stroke that temporarily left him unable to walk. Omar Lopez, 35, is one of many young individuals who are having strokes contrary to the belief that strokes only affect the elderly. A recent study suggests that 1 in 5 strokes now occur in adults 20 to 54 years of age up from 1 in 8 during the mid-90's.

Lopez, an avid runner and standout athlete, suffered a serious stroke three months ago at just 34 years of age. Doctors believe high blood pressure caused his stroke which has shocked many since his overall health was optimal.

"Omar is the perfect example of why high blood pressure and other common medical conditions, even when in great shape, should not be taken lightly,"his speech therapist at Barrow Neurological Institute, Janet Carrillo.M

Lopez, who moved to Arizona from Puerto Rico 4 years ago, was aware of his high blood pressure, but like many, did not seek treatment because he was young and otherwise healthy. The athlete never imagined that he could have a stroke.

"I thought stroke only occurred in the elderly and you had to have a number of risk factors for it to strike you," says Lopez. "I never knew that high blood pressure in an otherwise healthy 34-year-old man could cause a stroke."

In early February, Lopez experienced a tingling sensation and numbness on the left side of his body. He thought nothing of it and went to sleep. The next morning, he went to work and began experiencing blurred vision. His manager sent him to urgent care where his blood pressure rated so high that he was rushed to the nearest hospital. Two-thirds of the right side of his brain had stroked. He remained in the hospital for two weeks before being transferred to the Neuro Rehabilitation Center at St. Joseph's Barrow Neurological Institute for rehabilitation.

When Lopez arrived at Barrow, he couldn't change his clothes or stand on his own. He wasn't sure if he’d ever walk or run again. Just over two weeks later, Lopez walked out of Barrow and is now back to running multiple times a week.

There are many misconceptions about stroke and Lopez hopes to help other young individuals understand why it's crucial to pay attention to the small and more common types of risk factors that many do not take seriously.

"Risk factors such as high blood pressure and high cholesterol can contribute to stroke in young individuals so it's important pay attention to these factors," says Christina Kwasnica, MD, medical director of Barrow's Neuro Rehab Center.

"My family members urged me to seek help for my high blood pressure before I had the stroke and I didn’t follow through," says Lopez. "I want others to hear my story and be inspired to do something about their risk factors, even if they’re young."

Lopez and his speech therapist are available for interviews in Spanish. Please call (602) 406-3319 to schedule.