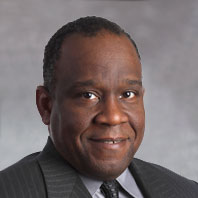 Dr. Farley’s expertise includes clinical trial design, new drug development, and treatment of complex gynecologic malignancies. He is a member of NRG Oncology, American Association of Cancer Research, Society of Gynecologic Oncologists, American Society of Clinical Oncology, and is a Fellow of the American Congress of Obstetricians and Gynecologists. In 2020, he received the Uniformed Services University of the Health Sciences Distinguished Alumni Award and the Society of Gynecologic Oncology Ambassador Award.  In 2014, he was named one of Arizona’s “Top Docs” by Phoenix Magazine. Dr. Farley is a highly decorated Colonel in the Army, awarded the Bronze Star Medal in 2005 and Meritorious Service Medal in 2006.

Dr. Farley received his undergraduate degree from the United States Military Academy. He then received his medical degree from Uniformed Services University of the Health Sciences. He subsequently completed his residency in Obstetrics and Gynecology and fellowship in Gynecologic Oncology at Walter Reed Army Medical Center.