SAN LUIS OBISPO, CA – June 6, 2022 – French Hospital Medical Center (FHMC) is pleased to announce a significant gift of $500,000 for the Beyond Health campaign from Steve and Barbara Hearst. This gift will support the hospital’s current $150 million expansion project for “Your New French Hospital,” which includes the addition of a new Patient Care Tower featuring single patient rooms, as well as a new heliport.

Hearst, the great grandson of William Randolph Hearst, has long been dedicated to enhancing health care services for patients on the Central Coast, due to his personal connection and family’s historic ties to the area. Together with his family and the Hearst Foundations, Hearst made the initial contributions that enabled French Hospital to establish the Hearst Cancer Resource Center (HCRC) in 2008. Since that time, Hearst has continued to provide significant support for the HCRC, including hosting the FHMC Foundation’s annual Share the Hope fundraiser and providing leadership on the Foundation’s HCRC Advisory Committee. 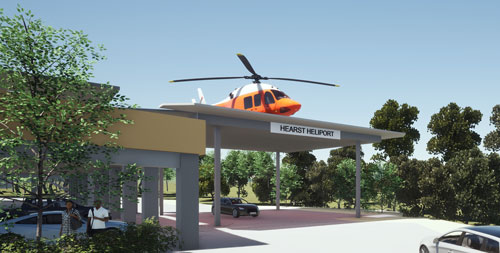 After learning about the Beyond Health Campaign and the enhanced levels of care “Your New French Hospital” will provide local residents, Steve Hearst and his wife, Barbara, became interested in supporting the effort. Among the new additions to the hospital will be a heliport, located on top of a new parking structure on the FHMC campus. This new heliport will significantly reduce the time of transporting trauma patients and patients in critical condition to and from the hospital, improving care outcomes and saving lives. Inspired by the impact that the heliport will have for patients, the Hearst’s made this generous contribution. In recognition of the gift, the new heliport will be named the Hearst Heliport.

The FHMC Foundation has also recently received a $250,000 grant from the Hearst Foundations to support the Beyond Health campaign.

“French Hospital has always impressed me with the way they care for the Central Coast community,” says Steve Hearst. “The new expansion of the hospital, including the heliport, is an important next step in continuing that legacy. I’m honored to be a part of bringing a new level of care to local patients.”

“Steve has always been a dedicated supporter of French Hospital and our local patients, as has the Hearst Foundations,” says Alan Iftiniuk, FHMC President and CEO. “We are incredibly grateful for their ongoing commitment to providing our community with the care it deserves.”

With this gift, the hospital has $137 million committed, with $120 million being invested by Dignity Health and the balance coming from many private donors in San Luis Obispo County. To date, the Beyond Health campaign has raised more than $17 million.

In addition to the Hearst Heliport, the expansion project for “Your New French Hospital” will include:

A four-story 85,000-square-foot Patient Care Tower will be built to accommodate the growth, with construction on the parking area to start in early 2023. The expansion is planned for completion in 2025.

To learn more about the project or to donate, visit www.gobeyondhealth.org.