PHOENIX, Ariz. (June 11, 2019) – Seven months after undergoing a very rare and complex brain surgery at Phoenix’s Barrow Neurological Institute and re-learning to walk, Chicago teen Norah Denahan is training to become a lifeguard at Montrose Beach this summer and has also returned to the soccer field.

“I can be a normal teenager again,” says Norah, who had to re-learn to walk after the operation and missed three months of freshman classes at Walter Payton College Prep. “The thing I looked forward to the most was getting cleared to play again.” 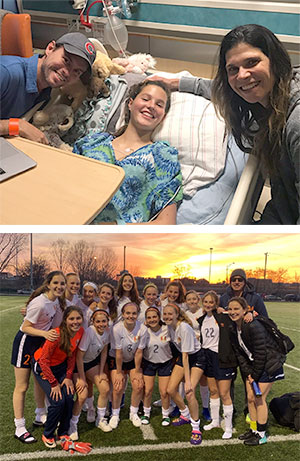 Norah flew to Phoenix for the high-risk surgery performed by Dr. Lawton, an internationally renowned neurosurgeon who has performed more than 1,000 cavernous malformation procedures, including 300 in the brainstem. After successful surgery to remove the malformation, called a cavernous malformation, at Barrow, Norah returned home to Chicago and eventually rejoined her twin sister, Nadine, at Walter Payton College Prep. She played on the JV girls soccer team this spring.

“We couldn’t believe that not only has she survived, she has recovered beautifully,” says Farah Denahan, Norah’s mother. “We tell Norah every day that she’s our inspiration. All of the doctors who have interacted with her have basically said she’s a miracle.”

Norah’s miracle is an everyday occurrence at Barrow, which performs more neurosurgeries annually than any hospital in the United States and is routinely listed by U.S News & World Report as among the best hospitals in the nation for neurological and neurosurgical care. Barrow is part of Dignity Health St. Joseph’s Hospital and Medical Center.

“I’m delighted at Norah’s speedy recovery and am thrilled that she has returned to school and athletic activities,” Dr. Lawton says. “Barrow is the place that patients anywhere in the world can come to when they need neurosurgical expertise, especially for complex procedures such as the one we performed on Norah. Success with this surgery is so dependent on neurosurgeon experience, and my team at Barrow has more experience with this problem than anywhere in the world.”

Cavernous malformations are clusters of small blood vessels (c)apillaries and veins with enlarged and irregular walls that are thinner than normal and more prone to leaking. These malformations can occur anywhere in the brain or spinal cord, and can be devastating when located in the brainstem.

In mid-September, Norah began suffering severe headaches. At first, doctors diagnosed a migraine. But when Norah began to experience slurred speech and numbness on one side of her body, her parents rushed her to an emergency room, and she was soon admitted to a Chicago pediatric hospital.

As Norah’s condition worsened, tests revealed that a cavernous malformation on Norah’s brain stem had hemorrhaged. It was clear that a delicate brain surgery would be required to prevent paralysis or death.

“It was scary,” Norah says. “I didn’t really comprehend what was happening. I was drugged up. To be honest, I mostly was scared of the needles, the IV.”

Norah’s parents spoke with numerous Chicago neurosurgeons. One of the doctors suggested that the family contact Dr. Lawton. After a phone consultation with Norah’s parents, Dr. Lawton arranged for a medical flight for Norah, whose condition made commercial air travel impossible.

“We talked to Dr. Lawton and he gave us logical arguments and it resonated with us,” said Neil Denahan, Norah’s father. “His experience was unmatched. He made sure that if we were going to take this leap of faith and get on a plane, we understood exactly what he would do to treat Norah.

“Living in Chicago, we obviously have some great hospitals and amazing doctors and surgeons,” Neil Denahan says. “There’s a lot of expertise related directly to cavernomas. But could we live with ourselves if something didn’t go according to plan and we knew there was a better option? Yeah, there was a lot involved logistically to make this happen, but at the end of the day it was very clear to us that this was our best option.”