Posted in:
A young a beauty queen with big dreams ahead received a life-saving double lung transplant on August 8 at St. Joseph's Hospital and Medical Center. Feeling grateful, the former Miss La Paz County is now thriving and aspires to become Miss Arizona.

Not an ordinary beauty queen, Alyson Tozer, 20, was born with a chronic disease called Cystic Fibrosis which causes an abundance of mucus that affects the lungs and the digestive system.

"Living with a chronic disease isn't easy, let alone performing," says the Parker resident who was crowned Miss La Paz County in 2012. "I'd have coughing attacks and people thought I had the flu, not realizing I was living with a chronic illness that isn't contagious."

But Tozer never let the disease, or frequent visits to Phoenix Children's Hospital, hold her back. 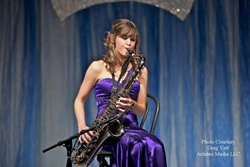 She learned to play the saxophone and played in the school band. After graduating from Parker High School, Tozer started competing in the Miss America Organization scholarship pageants and went to Arizona Western College where she became a motivational speaker for others with Cystic Fibrosis.

"Aside from music, my true passion is speaking and helping others with Cystic Fibrosis," says Tozer. "After recovering from a 41-day stay in the hospital due to a lung infection in July, I actually traveled to Chicago to give a speech about how important it is for people with Cystic Fibrosis to maintain a healthy weight."

At that time, Tozer says her lungs were only functioning at 40 percent. When she returned to Phoenix on July 31, Tozer was hospitalized again. In just two short weeks, her lung function had decreased by half.

"It is not uncommon for females with Cystic Fibrosis to experience a rapid health decline in their early twenties, although it is earlier than the average Cystic Fibrosis patient," says Rajat Walia, MD, medical director of lung transplantation at St. Joseph's.

The life span for a patient with Cystic Fibrosis has increased from not reaching grade school in the 1950's to a current average age of 37. Dr. Walia explains that a current cure can only help about four to five percent of patients with Cystic Fibrosis caused by a rare genetic mutation. Until a cure for other more common genetic mutations is available, treatment will be focused on early detection and preventative therapies.

"Often, as the disease progresses, lung transplantation becomes a viable option," Dr. Walia adds. "When we met Alyson, she was desperately ill and needed a timely lung transplant to survive."

Transferred to St. Joseph's on August 3, Tozer was listed for transplant just three days later. Knowing her life depended on a lung transplant, Tozer said, "after talking to the team at St. Joseph's, I was sold. It was the right decision to move forward and they were the team I wanted taking care of me."

On August 8, Tozer's family received news of the miracle they had been waiting for.

"It was a very special moment when Dr. Walia told me I had an organ offer," she recalls. "That was around seven in the morning. Then Dr. Kuo stopped by to tell me he was on his way to pick up my lungs, and I was wheeled back for surgery by one that afternoon."

Tozer's mother, Teresa, says, "We were humbled and are so appreciative, not only to the teams at St. Joseph's and Phoenix Children's, but also to the organ donor who gave Aly life."

"I am grateful beyond words for the second chance I've been given, and will celebrate my transplant date each year-my 'breath day'," says Tozer, who looks forward to serving as a speaking advocate for Cystic Fibrosis patients and organ donation as well as getting back to the saxophone and runway.

"Now that I can breathe, I want to make a difference," says Tozer. "My dream is to become the first Miss Arizona who has had a double lung transplant."

Providing many resources to optimize the quality of life for adults with Cystic Fibrosis, St. Joseph's is also home to the only lung transplant program in Arizona which is one of the busiest in the Southwest. The hospital's lung transplant program is just six-years-old and has performed more than 200 transplants and included patients from around the nation, ages 16 to 71.