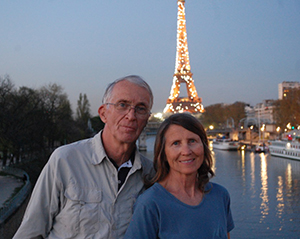 While traveling the world with his wife, Marcia, in 2010, retired Airforce Maj. Skaar noticed becoming short of breath more and more often with less and less exertion.

“We’ve been on more than 20 trips covering every continent except Antarctica since 2005 and seen more than 50 countries,” says Skaar, 69, from Alamogordo, New Mexico. “Then about two years ago, I noticed Marcia was outwalking me. That’s about the time I learned that I had pulmonary fibrosis.”

Pulmonary fibrosis occurs when scar tissue builds up in the walls of the lungs, making it progressively difficult to breathe. As in Skaar’s case, the disease often sets in with no known cause. While medicine has advanced and provides options for patients with pulmonary fibrosis, there is no cure and lung transplantation is often the last option.

Dignity Health St. Joseph’s Norton Thoracic Institute is home to the busiest lung transplant program in the western United States. In less than 10 years of existence, the Norton Institute has performed more than 400 lung transplants for patients from more than 30 different states—an impressive feat that few programs achieve.

“We knew it would grow and be successful, but this pace is remarkable,” Ross Bremner, MD, director of the Institute says of the fast growing lung transplant program which he and a team from California started at St. Joseph’s in 2007. “I will always remember our first patient and how excited we were to help her live. Seeing patients like Bob thriving, making plans, and enjoying life are moments that make all the endless hours of work worthwhile.”

Also impressive, the Norton Institute’s average lung donor waitlist time is less than one month, which is significant when compared to the national average of more than four months. Skaar was on the transplant waitlist for only six weeks before he received his set of lifesaving donor lungs at St. Joseph’s on Dec. 5, 2015.

Surprised to learn he received one of the program’s milestone transplants, Skaar adds, “It was really just luck of the draw. It could have been anyone, but being treated the way I was from the moment I walked through the doors to being told I was ‘number 400’ tells me that they are darned good at what they do.”

The Norton Thoracic Institute is dedicated to improving the lives of patients and specializes in evaluation, diagnosis and treatment of diseases of the lungs, chest, or esophagus. Recently recognized for providing high quality care in addition to education and research, the Norton Institute was selected as a member of the Pulmonary Fibrosis Foundation’s National PFF Care Center Network, a safe haven of sorts for pulmonary fibrosis patients.

“Marcia and I love experiencing different cultures, histories and architecture. I can’t wait to make it wherever we’re going without worry,” adds Skaar, “I wouldn’t be looking forward to traveling, and seeing my son and grandkids in North Carolina without the team at St. Joseph’s.”