Posted in:
Surprise resident Katherine Oetken got the surprise of her life today when she learned that she is Arizona's Newest Millionaire. 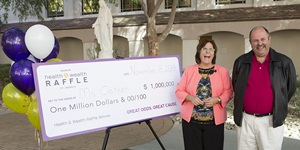 Oetken—who has played in nearly every Raffle since the Health & Wealth Raffle debuted more than 10 years ago—came to the Raffle prize announcement knowing she had won one of three grand prizes but never thinking it would be the big $1-Million Grand Prize.

That’s because Oetken believes that the Raffle “is all about giving” to research at St. Joseph’s Hospital and Barrow Neurological Institute. “My sister died of esophageal cancer, and I have esophageal problems,” she said. “The research done here could help people like us someday.”

Still, winning $1-million felt pretty good. Oetken plans to use her unexpected windfall to pay off a few debts and perhaps move into a bigger house. “The rest of it is going into a savings account for retirement,” she said.

Oetken moved from Iowa to Arizona 10 years ago to care for her sister after she was diagnosed with cancer. She works for the City of Peoria.

Also on the horizon for Sharrock: a 10-day trip to Ireland and a new mattress. “And there will be better Christmas presents this year for the nieces and nephews,” he said.

The Health & Wealth Raffle will be back next Spring—don’t miss out on the chance to become Arizona’s Next Millionaire. Great odds, great cause!

The Health & Wealth Raffle is the first fundraiser of its kind in Arizona and one of the largest fundraisers for Barrow Neurological Institute and St. Joseph’s Hospital and Medical Center. Now in its 10th year, the Health & Wealth Raffle has sponsored 19 successful raffles and contributed more than $50 million to research, medical education and patient care at Barrow and St. Joseph’s. The majority of prizes and services to run the Raffle are purchased in the state of Arizona, contributing to our state’s economy.