Posted in:
Neurosurgeons at Barrow Neurological Institute at St. Joseph's Hospital and Medical Center in Phoenix have successfully removed a rare and complex spinal lesion from a 26-year-old woman from Norway, eliminating her prognosis of becoming a permanent paraplegic.

Before traveling to the U.S. for surgery at Barrow, Julie Stendal was told by surgeons from throughout the world that her malformation was too risky and impossible to remove. After successful surgery, Stendal is scheduled to be released from Barrow on Easter. 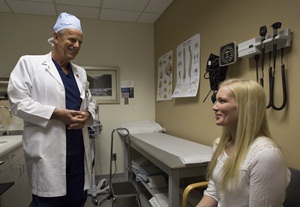 "Before I came to Barrow, I was told that the type of lesion I had was extremely rare and surgery was impossible," says Stendal. "No one had ever seen anything like my condition and I was terrified of becoming completely paralyzed."

Stendal, who lives in Oslo, Norway and is a nurse, first noticed symptoms around Easter in 2008 when she experienced numbness on the left side of her body. She was admitted to a hospital where she was diagnosed with an arteriovenous malformation (AVM), a very rare neurological disorder that was causing abnormal tangles of arteries and veins in her spine. The malformation had hemorrhaged causing her limited function. After undergoing a small procedure in Paris she was told no other treatment option was available.

In January, the AVM had ruptured again and her chance of paralysis was significant. Her doctors in Norway reached out to Robert Spetzler, MD, renowned neurosurgeon and director of St. Joseph's Barrow Neurological Institute, who agreed to perform a surgery invented at Barrow to remove the AVM. Because of the complexity of Stendal's AVM, the surgery itself had risks for paraplegia. Dr. Spetzler completely removed Stendal's malformation and two days following surgery, Stendal was walking. She is expected to make a complete recovery.

"Julie's AVM was very rare and was one of the most difficult cases," says Dr. Spetzler. "The surgery we used was invented at Barrow and is not done anywhere else. I'm pleased at how well she is recovering and her prognosis is excellent."

Dr. Spetzler was so impressed by Stendal's outcome that he recently presented her case at a national neurosurgery conference to educate other surgeons about her condition and the surgical procedure used. Stendal's case was so complex that even her neurosurgeon in Norway traveled to Barrow with Stendal to observe her surgery in hopes of helping future European patients like her.