Posted in:
A young nurse recently saved the life of a total stranger by donating one of her kidneys. In giving her kidney, Kate Burris, 27, Scottsdale, became the first altruistic kidney donor at Dignity Health St. Joseph's Hospital and Medical Center and part of a small, but growing number of people in the U.S. who give one of their kidneys to a stranger. 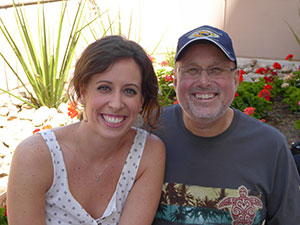 "I just thought, I don't need this kidney. Somebody else does," Burris says.

After the March 22 surgery, Burris told Lisa Scharnow, RN, kidney transplant coordinator at St. Joseph's, that she wanted to meet the recipient of her kidney. Ensslin agreed, and the two met four days later, as Burris was leaving the hospital.

There was an "immediate connection," says Ensslin, who has lived with kidney disease for 17 years. "Kate's gift was the greatest gift ever. It will allow me to have a regular life, to keep going and not be sick the rest of my life."

Burris, too, was deeply touched by their meeting. "I'm just so happy to see him doing well," she says. "It's not just him I'm helping-I'm helping his wife, his mom, his kids. I didn't realize how many people I was helping. It's an awesome feeling. I would donate again if I could."

Giving a kidney to a stranger was virtually unheard of 20 years ago when transplant centers worried about donors' motivation, emotional and mental health, and medical risks. Today, health care professionals realize that, for some people, donating a kidney gives the same kind of personal satisfaction that donating blood or giving to charity does.

Burris, who is a nurse and a blood donor, says she first became interested in altruistic kidney donation while watching an old episode of Grey's Anatomy. "As I was watching it, I wondered, 'Why couldn't I do this?'" After hours of research, Burris says, "I couldn't find any reason not to donate. The risks to me were so minimal that I felt the benefits outweighed the risks."

At St. Joseph's, Burris underwent a series of screenings to assess her physical, emotional and psychosocial health. "We wanted to understand what was driving her desire to donate," says Scharnow. "We wanted to make sure she was in a good place to make such a profound decision."

Burris and Ensslin have both returned to work. Ensslin, who says he has much more energy now, has multiple business trips scheduled in the next few weeks.

"Donors like Kate are important to the future of organ donation," says Dr. Jeffrey Brink, Ensslin's transplant surgeon. "There are far too few kidneys for the current need."