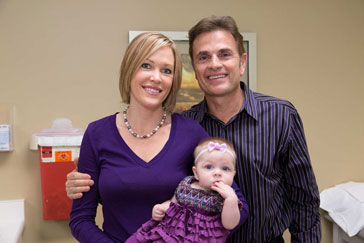 Given just months to live in 2006, a 32-year-old Arizona woman, treated at St. Joseph’s Barrow Neurological Institute, has amazingly beat two brain tumors, outlived her projected life expectancy, and recently became a mother – all things no one ever thought imaginable. She will celebrate her first Mother’s Day this Sunday. May is also National Brain Tumor Awareness Month.

When diagnosed with a grade 4 Glioblastoma brain tumor, the deadliest of brain cancers, in 2006, Heather Knies was facing a death sentence. Most people with her type of tumor – the same type of brain tumor Senator Edward Kennedy died from – don’t live past 14 months. Knies not only beat her cancer but she has gotten married and recently became a mom to her daughter Zoe, who is 10-months-old. Knies’ incredible outcome has shocked the medical community.

“It is very rare for a patient to survive as long as Heather has with this type of brain tumor. I am very, very surprised and elated that Heather has made such a remarkable recovery,” says her surgeon Robert Spetzler, MD, director of Barrow Neurological Institute and who is considered one of the world’s top brain surgeons. “She has no neurological deficits and her MRI scan demonstrates no evidence of any residual tumor.”

Knies was originally treated for a lower grade brain tumor in 2005 at age 24. Even with treatment, her brain tumor was one that usually returns and transforms into a more aggressive type of tumor. One year later, her brain cancer returned, and this time, it was the deadliest of brain tumors – a grade 4 Glioblastoma. Knies was facing a death sentence.

She underwent a very aggressive surgery by Dr. Spetzler at Barrow to remove as much of the tumor as possible. She then underwent radiation followed by three years of chemotherapy to treat the remainder of the tumor. Barrow is one of the world’s top brain tumor treatment centers.

Nearly seven years later, Knies cancer has miraculously not returned. She believes that the advanced medical treatment she received along with her unbelievable positivity is what made her overcome her brain tumor. Her 10-month-old daughter is also a miracle since chemotherapy can lead to infertility.

“I knew all along I would beat this cancer,” says Knies. “When a doctor tells you that you only have a few months to live, most people believe it. I never did and I think that’s partly why I’m alive today. I knew I was getting the best medical care and I was going to be defiant and survive.”