Young Woman Gets Second Chance Thanks to St. Joseph’s and Facebook

One of the first patients to receive a kidney transplant in the new program at Dignity Health St. Joseph’s Hospital and Medical Center received the life-saving gift thanks to Facebook.

Six months post transplant, 27-year-old Flagstaff, Ariz. resident Katie Grannan is now thriving and has returned to her work in medical device sales. She says it’s all because of the power of social media and the genuine act of humankindness from family friend and business woman, Amy Sperry, who lives in Cornville, Ariz. 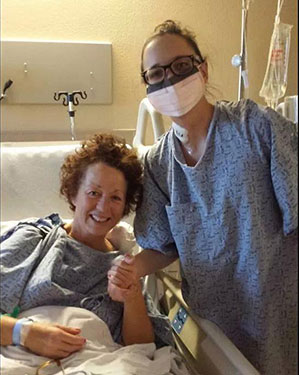 “We were neighbors and Amy’s husband worked with my dad selling real estate in Flagstaff and our families became good friends. They moved away three years ago,” says Grannan, who suffered from a rare autoimmune disease that has attacked her kidneys over the last 17 years. “We lost touch some, but my mom and Amy stayed friends on Facebook. And that’s how she learned I needed a kidney.”

The young Flagstaff woman’s nephrologist and medical director for the Valley’s newest kidney transplant program at St. Joseph’s, Rajiv Poduval, MD, told Grannan in July 2014 that her kidney function had dropped to 14 per cent. She would need to start dialysis or get a kidney transplant to survive.

“It was incredible how quickly I had several offers,” explains Grannan, a graduate from Northern Arizona University who received the transplant on Nov. 18, 2014. “Amy stepped forward and all our prayers were answered. She was tested, and was the perfect match. I can’t thank her enough.  She's amazing.”

Sperry says she just wanted to help and that it seemed like a simple choice, “I thought, ‘I’m healthy, so why wouldn’t I help Katie?’” While she had heard rumors the donor’s recovery is much worse than that of the recipient, Sperry says she’s happy to dispel them.

“I was making laps of the halls of the hospital 15 hours after the operation,” says Sperry who now sees a nephrologist at St. Joseph’s only periodically and has her six month post-operation follow-up on May 8. “I took a few weeks off work and felt 100 percent normal within one month. I hope others who are considering living donation really start doing their research. The doctors won’t let you donate if you’re not in good health. I would donate again if I could,” Sperry adds.

“Living with a kidney disease hasn’t been easy,” says Grannan. “I dealt with constant back pain and extreme fatigue and was hospitalized a few times. I knew I’d need a transplant eventually. Now I celebrate each day. Thanks to Amy, Facebook, and the team at St. Joseph’s I can go back to living my life!” - St. Joseph’s