Building on a foundation of more than seven decades of unparalleled care for the body, mind, and spirit in Henderson and Las Vegas, the Dignity Health-St. Rose Dominican, San Martín Campus takes hospital care in southern Nevada to the next level. 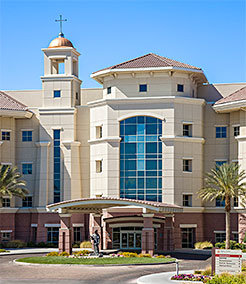 The third acute care hospital in the Dignity Health-St. Rose Dominican system, the San Martín Campus opened its doors to the public November 8, 2006, to serve the growing needs of the community. Located on Warm Springs Road in southwest Las Vegas, the hospital has received numerous awards and recognition for its quality care. 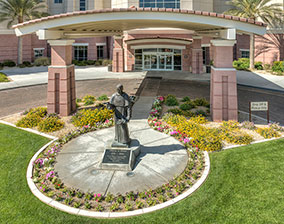 The hospital was named in honor of Saint Martín de Porres, a personal friend and counselor to Rose de Lima in the 1600s. His father was Don Juan de Porres, a Spanish Knight, and his mother was Anna Velasquez, a freed woman from Panama of African descent. As a Dominican brother, Martín was known for his ability to provide physical and spiritual care to the sick and poor, including slaves. St. Martín maintained an animal hospital and established an orphanage and hospital for poor children.

The San Martín Campus has many features designed to make patients and visitors feel comfortable and secure. Outside, the cascading waterfall in the Rendina Family Healing Garden creates a calming, relaxed atmosphere while the labyrinth designed by Robert Ferré offers a place for the entire community to find serenity.

Dignity Health-St. Rose Dominican believes families are an important part of the healing process. As we are continuing to see decrease in southern Nevada COVID cases, we are updating visitation guidelines and hours effective Tuesday, March 15.